liposuction and transfer of fat to breast 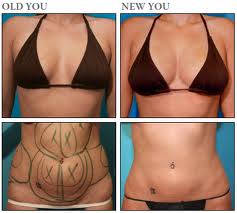 Stem cells are precursor cells or cells that have not been programed yet. Think of them as generic cells that can turn into whatever type of cell that surrounds them, as well as enhance the existing cells with extra hormone-type substances—called “growth factors”—that they secrete. There is promising research being done right now that gives us hope that one day adult human stem cells will be used to restore injured tissue after heart attacks, or even spinal cord injuries.

How did plastic surgeons get involved with something that started out as a potential “magic cure” for heart attack and spinal cord injury?

One of the most exciting discoveries has been that the fat we’ve been throwing away after liposuction cases is full of stem cells. And most of us have at least some of that to spare.

So what does it mean when your plastic surgery is enhanced with your stem cells?

Usually it is a procedure that already involves fat injection, such as Brazillian Buttock Enhancement or fat injection breast augmentation.  Then it means that your plastic surgeon is also using an expensive machine to isolate out an even more concentrated number of stem cells from the fat, and injecting it all back in together wherever the fat is going—usually the face, breasts or buttocks. It also means that you are probably paying extra because the plastic surgeon has to pay off the loan on the machine, and for whatever expensive marketing they’re doing to sell their “stem cell” surgeries.

So is it worth the extra money?

There has been promising data regarding the positive effects of fat injection. The science points toward the stem cells and their growth factors as the main reason for this success. However, at this time in 2012, there is no hard data to prove that isolating out some of the stem cells and then mixing it up with the fat to give you “supercharged stem cell” fat injections is superior to just injecting the fat with its regular stem cell concentration. But the term “Stem Cell” has become as much of a marketing buzz-word and this is where it gets confusing  for best cosmetic surgeon in Beverly Hills.