Most scientific studies say people who have had weight-loss surgery can expect to shed 60 to 70 percent of their excess body weight in about two years, but a Beverly Hills doctor claims her patients lose more weight than the national average. 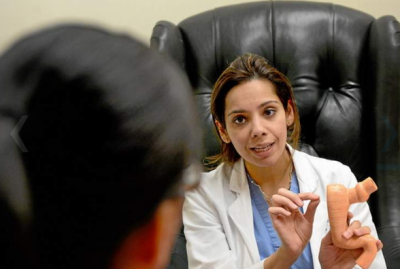 Dr. Monali Misra joined Beverly Hills Physicians in 2010 and has performed more than 3,000 bariatric or weight-loss surgeries. Her office has a comprehensive program that includes mandatory phone and email communication with a dietitian and psychologist pre- and post-operation.

Although many people consider weight-loss procedures cosmetic, the Food and Drug Administration approved laparoscopic bariatric surgery more than 20 years ago. This technique requires five or six small incisions. (Traditional bariatric surgery, which includes a 10- to 14-inch incision from the edge of the breastbone to the belly button, has been an approved procedure longer.) In certain circumstances, insurance companies even pay for them.

“There’s a lot of ignorance on the subject,” Misra said. “People think that if you just eat well and exercise, you’ll do fine. But when you’re 150 pounds overweight, research has shown that more is required.”

The procedure, if successful, can reduce life-threatening, weight-related health problems such as heart disease, high blood pressure, severe sleep apnea or interrupted breathing during slumber, and Type 2 diabetes. As a result, in 2011 the FDA lowered the minimum requirements for bariatric surgery.

Now, patients with a body mass index of 35 or BMI of 30 with at least one medical problem are FDA-approved to seek bariatric surgery.

Although gastric bypass surgery is the most common type of bariatric surgery in the U.S., Misra said sleeve gastrectomy has grown in popularity at her practice. About 40 percent of her patients opt for the sleeve; 30 percent, the Lap-Band; and 30 percent, gastric bypass.

Some of her patients believe their lives have been transformed. Robert and Veronica Cordova of Victorville decided to get sleeve gastrectomies. The procedures removed large portions of their stomachs, leaving smaller stomachs, each about the size of a banana.

Before the surgery, they tried exercise and popular weight-loss programs, but said none of them worked for long. Even though they lost some weight initially, the weight always returned, they said. Sometimes, they even put on more weight.

About 10 months after his surgery, Robert Cordova now weighs 186 pounds. He has lost 86 pounds, and his wife has lost 91 pounds. She now weighs 202 pounds.

“The surgery saved both my life and my wife’s life,” said Cordova, 39, who suffered a heart attack when he was 37. “It saved our marriage. My wife got to the point where she didn’t even want to make love because she felt embarrassed about herself.”

Their insurance covered their sleeve gastrectomies, so they each only paid $250.

But bariatric surgery is not a magic switch. Misra drills that fact into her patients.

“It’s not just the surgery. It’s a tool, and the effectiveness of the tool is determined by how well you listen to the rules,” Misra said.

The Cordovas said these talks made them realize they needed to change their relationship with food. They used to live to eat, but now they eat to live, Robert Cordova said.

“We enjoyed the buffet. Getting the biggest bang for your buck. Now we go out more, we do different things with each other that does not really revolve around food,” he said.

The Cordovas also transformed the way they think about exercise. They thought they needed to put themselves “through boot camp, really beating” themselves. But the Beverly Hills Physicians psychologist made them realize exercise doesn’t need to be extreme as long as it’s a daily part of their lives, Robert Cordova said.

Their food habits also have changed. Misra said patients who go through bariatric surgery should only have meals that are about the size of a deck of cards. They need to chew their food approximately 20 times before they swallow. Then they should wait for a while before repeating the process. If they don’t follow these rules, they might feel pressure in their chest or vomit.

Felice Trager, 29, works in accounting in Corona. She had sleep apnea, and her doctor said she may soon have diabetes. These are no longer conditions she worries about.

Trager decided to get the Lap-Band, a device implanted around the upper part of the stomach to limit the amount of food that can be eaten in one sitting. She now weighs 118 pounds, but she used to weigh 286 pounds.

“We live in Southern California, and I had been to the beach a handful of times. Now there’s no way I can count it. We’re there whenever it is warm,” she said.

Her weight worried her because she has a young daughter. Even though her insurance didn’t cover the Lap-Band, she decided to go for it anyway. She didn’t say how much the procedure cost her, but the starting price for bariatric surgeries at Beverly Hills Physicians – which has 16 locations, including in the Valley, Pasadena, Carson and Torrance – is $16,000 for cash patients.

Even though there are success stories, not everyone who goes through the procedure is happy with it. Trager said co-workers at her Corona office saw how much weight she lost, so they decided to get the Lap-Band too.

“But they have not had the success. It really does matter where you go and the doctor you go to,” she said. Some places “just want people in like a cattle call,” she said.

Other negative effects, though rare, do happen. Risks and complications include hernias and blood clots. Less than 2 percent get an infection because of the foreign objects added to their body, Misra said. Dumping syndrome or rapid gastric emptying includes symptoms such as abdominal cramps, nausea and diarrhea. Misra said dumping syndrome only happens if patients eat heavy carbohydrates.

Also, people who have a history of alcohol abuse should think twice. A National Institutes of Health study found that weight-loss surgery increases the risk of alcohol use disorders two years after the surgery.